As the year draws to a close, and critics make their top 10 lists and check them twice (or three or four or five times), it’s a good time to remember the films that, for whatever reason, one didn’t have a chance to acknowledge. Maybe they didn’t fit into a larger argument or angle on a film festival, or maybe I’d been stashing them away for a theatrical release that hasn’t happened yet, or maybe I didn’t know what to make of them or what to say about them, maybe I just forgot or got busy. There’s this small, year-end window when these unfairly orphaned films can be given the attention they deserve—before Sundance begins in late January and floods the culture with a new round of films, making it difficult to haul these older titles back upstream. I first caught Nick Berardini’s Killing Them Safely back in the spring, at a sneak preview screening before its premiere in Tribeca, and when it was still called Tom Swift and His Electric Rifle. Yet in conversation, it’s always been referred to as “The Taser Film” in honor of its subject—Taser International, founded by Rick and Tom Smith. Purveyors of the world’s most popular stun gun, which is purveyed wholesale to law enforcement agencies around the world, Taser enjoys name recognition not unlike Hoover or Kleenex in the mid-20th century—the brand has become synonymous with the product. The same reason Killing Them Safely stuck with me is the same reason that it can be a tough sell in a marketplace accustomed to easy arguments and sermons delivered to a pre-sold choir: it’s an exposé less of an undisputed evil—on the whole, Tasers are indeed safer than guns—than of the company’s unnecessarily and ultimately lethally shady business practices.

Through deep and nimble reporting, Berardini shows that Taser has made a habit of downplaying its product’s flaws, deficiencies, and dangers, even to the law enforcement officers who then misuse the product to sometimes deadly effect (crucial clips of which are responsibly included in the film). It’s less an issue film than a nuanced moral inquiry, one that had me feeling as squeamish about the larger culture of corporate impunity as about the admit-no-wrongdoing spin-doctoring of the Smiths. They’re like the insouciant protagonists of an after-school special who forgot to tighten the wheel of a boxcar, and then won’t take responsibility for the crash it caused. Except this involves millions in profits, fickle stockholders, supposedly safe weapons being handled homicidally, and citizens being killed. Banana Pancakes and the Children of Sticky Rice

While vastly different in both style and content, what Killing Them Safely shares with Banana Pancakes and the Children of Sticky Rice is a commitment to complications that unsettle rather than reaffirm. Such lack of condescension or self-congratulation is refreshing, if also hard to market. I saw Banana Pancakes and the Children of Sticky Rice—a title markedly longer and more ponderous than even Tom Swift and His Electric Rifle—at the Chicago International Film Festival in October, where longtime freelance colleague Anthony Kaufman programmed a diverse nonfiction competition comprised of titles I’d not yet encountered on the festival circuit. Truth be told, I served on that jury, but another truth to tell is that my cohort didn’t give a prize to Daan Veldhuizen’s film—another way that worthy titles slip through the cracks, never getting those extra little pushes along the way.

In Muang Ngoi, a fertile region in Northern Laos where rivers flow and rice paddies flourish, two twentysomething childhood friends struggle to remain close despite diverging interests and impulses. Shia is a searcher, a moody, soulful striver who exudes James Dean’s implicitly terrified cool. Khao is a prepossessed but naive young farmer and father, at peace with his own life but also curious about others. During the dry season they both work in a nearby river village, offering tours and services to visiting foreigners, who arrive in greater numbers every year. After offering compelling portraits of both Shia and Khao, and bringing the audience into their headspaces via first-person voiceover, the Dutch-born Veldhuizen radically, if only temporarily, shifts focus and point of view to the tourists, who are exactly as annoying as you expect them to be and yet also more sensitive to their effect on the community, and to their relative cluelessness about the lives they’ve come to fetishize.

Veldhuizen actually goes one further, amping up the style of his filmmaking to rhyme with wide-eyed hippies with whom he’s empathizing, complete with acoustic-scored montages of beach behavior. Some might find such sequences arch and condemnatory, but I thought they were sincere attempts to toke on the spirit of these subjects. When the point of view flips back to the villagers, we’re free to laugh at the slumming tourists, but neither Shia nor Khao will be joining us. They’re too interested in making a living and widening their horizons, seeing these well-traveled visitors as an access point to the wider world, especially for homebody Khao. Instead, the only real ire in the film is directed at the filmmaker himself, courtesy of a drunk and serially humiliated Shia, who, across from a bar and into a hot lavalier mic, accuses Veldhuizen and his ever-present camera of mocking and exploiting him. With all of the tonal and aesthetic shifts, the treading into the dubious and discomfiting terrain shared by natives and tourists, it’s hard to know just what to make of the film and its maker (who impressively, if a touch too slickly, also photographed and edited). But it’s the not knowing, and furthermore being allowed not to know, that makes Banana Pancakes and the Children of Sticky Rice something remarkable. That slightly queasy feeling, those unresolved questions about perspective and power and exploitation? That’s the stuff. The Ground We Won

Some of those questions can be carried over to The Ground We Won, another where-the-hell-did-this-come-from offering I caught at the emboldened Camden Film Festival in September. Are we meant to laugh at the motley group of New Zealand rugby players in Christopher Pryor’s film, or root for them, or find them cute, or repulsive? These questions arise more forcefully than they normally might because of Pryor’s aesthetic, which complicates objectivity with high-contrast black and white, ambitious shot-making, and even floridly poetic, dissolve-happy montages of men scrumming on the pitch. Those montages are invariably followed by steam-letting sessions at the pub or team bus, which invariably end in pratfalls or vomiting, which are then followed by sequences of the men recovering enough to labor at their day jobs. And on we move to the next game. It’s through Pryor’s cyclical structure that the film really won me over, as it poignantly, but never too intently, asserts that these men are both trapped in their patterns and able to transcend them. There’s glory, and respite, in a game won or well played, or in a pint sought and earned, or in the gallows humor and affectionate insults shared between working men. It’s often ugly but Pryor shoots it pretty, which feels less imposed on the characters than wryly, if also sincerely, invoked by them.

I recalled The Ground We Won while watching both Sergio Oksman’s O Futebol (which Nick Pinkerton rightly raved about for FILM COMMENT out of Locarno in August) and Nikolaus Geyrhalter’s Over the Years recently at RIDM in Montreal. The former for its acknowledgement of the important, and oftentimes exclusive role that sports play in heterosexual male relationships, and the latter for its acknowledgment of the inseparability of working and private lives. I can’t begin to do justice to Geyrhalter’s monumental, three-hour, decade-spanning film here, but I’ll at least say that I can’t recall seeing a film more committed to appreciating and understanding the lives of its subjects. That’s perhaps too broad of a statement, and clearly there’s a lot of competition, from Wiseman on down, but what’s striking about Geyrhalter’s film is how that commitment results in a structural and rhythmic awkwardness, and to some degree a failure of storytelling. He starts filming when there are just a handful of employees remaining at the looms of a 19th-century textile factory in the northern Austrian town of Waldviertel, with the evident intent of watching the factory give up the ghost, and these longtime, nearly lifelong employees lose their livelihoods. But what starts as an evidence-based, longitudinal, locked-off-camera portrait of the failures of EU capitalism via these workers scattered to the winds, becomes more responsive to the unpredictability and banality of human lives over the years. Very little drama occurs in the film, and the changes to the faces and bodies of these mostly middle-aged Austrians is mostly subtle. What happens is they get new jobs. And then they get other new jobs. Or they don’t get new jobs, and try to get by on a spouse’s salary. Or they recycle bottles and cans to pay rent. Or they depend on a pension. Sometimes they’re really struggling, but mostly they’re just living. Addressing them from behind the camera, Geyrhalter tries to get them to reminisce about the factory, or bemoan what’s become of it, but their responses don’t always satisfy his expectations, or lead anywhere at all. And so he asks about what they’re doing. How they do their jobs, and what they like about them. What they do in their spare time, and why.

Steadily, as the years piled on and the hours accumulated in the film, I stopped waiting for dramatic events to jostle me from these commonalities, and instead wanted them to linger even longer. I stopped waiting for Geyrhalter to show me the meaning, and instead wanted him to just keep filming. Let’s sit in the basement and watch a guy build a doll’s house for his granddaughter. Let’s watch the 50-year-old virgin hand-write the name of every song he’s got on compact disc into an endless ledger. Let’s watch a couple take a walk together, or take country line-dancing lessons. Let’s watch a family watch a stock car race. Let’s watch them work, and play, and most of all, let’s watch them occupy the time. Geyrhalter’s subjects don’t necessarily transcend their lives through any of this action or inaction, but they do manage to transcend whatever metaphorical representation or characterizations the director may have planned or hoped for them back when he started filming in 2004. They started as soon-to-be-ex textile workers, and end up as a dispersed collection of ordinary people, living in a region, moving through spaces, and worrying over concerns you rarely encounter in films. By the end, I couldn’t bear to let any of them go. 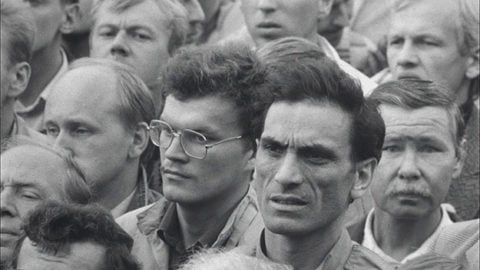