Film of the Week: The Other Side of Hope 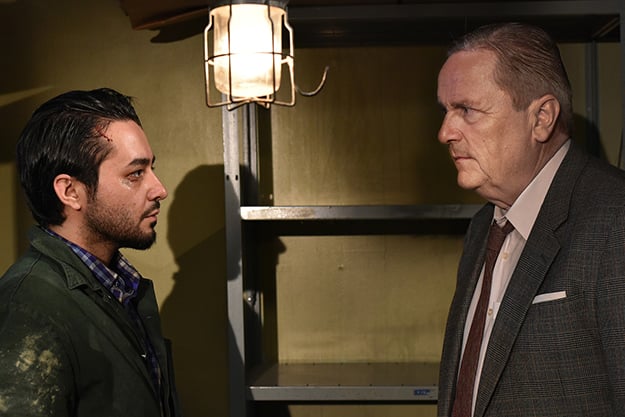 Aki Kaurismäki’s films are, you might say, joyously lugubrious. Whether or not his work in any way represents the reality of Finnish life, since the 1980s he has certainly been the ambassador of a certain national spirit, or at least a cartoon version of it: a terse, bibulous glumness with a warm-hearted streak of rebellious idealism just underneath its prickly surface. Kaurismäki’s characters have invariably been fairly morose, but his films have increasingly focused on people who genuinely have something to be morose about: economically challenged working people in Drifting Clouds (1996), the homeless in The Man Without a Past (2002), and in 2011’s Le Havre, a film which widened his focus somewhat, to refugees searching for new hope and a new home.

That film was about an elderly French shoeshine man befriending a young immigrant boy from Africa. Its follow-up, The Other Side of Hope, is about a middle-aged businessman turned restaurateur befriending a Syrian asylum seeker. In that sense, it’s something of a rerun of Le Havre—but then, The Other Side of Hope is also a rerun of other Kaurismäki films, not least Drifting Clouds, about a couple’s beleaguered attempts to run a struggling restaurant. Parts of Kaurismäki’s latest, in which a disillusioned businessman attempts to relaunch a no-hope diner, feel like Drifting Clouds 2, right down to the appearance of a winsome dog (but then, even if Kaurismäki set a film on the surface of Mars, there would be a winsome dog somewhere).

So The Other Side of Hope is pretty much the same familiar formula—and no doubt, you can find some self-deprecating interview somewhere in which Kaurismäki sullenly chastises himself for running out of ideas. And yet this film feels considerably less a matter of treading water than 2006’s somewhat weary Lights in the Dusk—and besides, Kaurismäki recycling himself with panache and conviction can be a hell of a lot more fruitful than many other directors’ originality. Much of The Other Side of Hope cleaves to a familiar formula: terse, physically static acting; super-economical editing; a schematically limited color palette (Kaurismäki and regular DP Timo Salminen have made a certain shade of blue, a slightly more inert cousin of International Klein Blue, their very own); a sparse, retro-style, quasi-noir aesthetic; the sardonic, more than poker-faced humor; music commentary in the form of Finnish tango and garage rock. Every one of those boxes is ticked here, as is the presence of some faithful actors (including the hulking Sakari Kuosmanen and Janne Hyytiäinen from Lights in the Dusk). What’s new, however, is that Kaurismäki is telling two separate stories this time—although he’s endearingly cavalier about the way he brings them together.

One story, for a change, not only has a deeply serious thrust, it’s also told with absolute seriousness—for the most part. Its hero is Khaled (Sherwan Haji), a young garage mechanic from Syria who—we discover in a long interview he gives to Finnish immigration services—left Aleppo with his sister after their entire family was killed by a bomb (fired by who knows who, he says: the government, rebels, the U.S., Russia, Hezbollah, Isis? What does it matter, given the result?). He has arrived in Finland by accident, having hidden on a ship after being attacked by skinheads in Gdansk; before that, he and his sister Miriam passed through Turkey, Greece, Serbia, Hungary, and elsewhere, but were parted along the way.

All this emerges later in the film. The first we see of Khaled, however, conveys the bare essentials about his predicament—i.e. that he is a man reduced to the bare essentials. He is first seen as a dust-blackened face emerging from a pile of coal on a cargo vessel. Black from head to foot, he leaves the ship (pausing to stare impassively at the film’s only truly surreal image: a puppet dog speaking Finnish on TV). Checking into a hostel and showering, Khaled goes the next day to request asylum at a police station, where a weary officer announces ominously that requesting asylum is no problem, and that there have been plenty before him. The other half of the film, interleaved with Khaled’s quest, is about Waldemar Wykström (Kuosmanen, a Kaurismäki regular since 1985’s Calamari Union), a late-middle-aged seller of men’s shirts. One day, he leaves his unsmiling wife (seen sitting at her kitchen table with a full ashtray, a half-full bottle, and a fearsomely spiked cactus), sells up his business and decides to refund his life with a night at a gambling table. The gambling sequence, which lasts five minutes and is like a self-enclosed Melvillean moment within the film, is superbly terse, a master class in the art of showing men glancing with stony inscrutability at each other. The players (they include filmmaker Jörn Donner) are all dead-eyed patriarchs, some of whom look as if their faces would flop inertly onto the table if they were reckless enough to attempt a smile. And the sequence ends, in a perfect little micro-flourish, with a close-up of a single casino chip spinning on a baize table.

It’s some 35 minutes into the film before this slow-burn narrative gets to grips with what will be its central comic shtick: Wykström’s new venture, a failing restaurant named the Golden Pint. “Makes you thirsty right away,” enthuses the business broker who arranges for Wykström to buy the business; his client’s response of a frosty look, held just a second longer than you expect, is one of the film’s priceless touches. The Golden Pint comes equipped with three staff members—a waitress, an entirely redundant doorman, and a chef (Hyytiäinen) first seen dozing upright, cigarette in mouth. It also has a limited menu: on one day, there’s only a choice between meatballs and “pepper sardines,” the latter served cold, still in the can.

Eventually, Kaurismäki offers another self-enclosed routine that seems to have casually wandered in from another film—this one broadly farcical and involving the abortive reinvention of the Golden Pint as “Imperial Sushi,” and a coachload of Japanese tourists being palmed off with the contents of a tub of herring (“Wasabi will hide the taste of salt”). By this time, Khaled is on the staff, having at last properly crossed paths with Wykström. Their encounter starts with a cursory punch-up, possibly a Kaurismäkian tribute to Fordian/Hawksian codes of masculine bonding, but the entrepreneur is soon looking out for the migrant like a benevolent uncle, if a consistently grouchy one. Before Khaled joins the restaurant staff, the film zigzags languidly between the two men’s stories, and feels altogether like two different movies. One is an entire typical Kaurismäki comedy of loneliness, in which a man gets through life pragmatically and with the minimum of speech—although Wykström isn’t averse to the odd cutting one-liner. There’s also a characteristic theme of melancholic wanderlust: the inimitably sour-faced Kati Outinen, a Kaurismäki female lead from way back, drops by long enough for her character to share a bottle of port with Wykström before announcing that she’s moving to Mexico City: “I’ll drink sake and dance hula hula. I need action after all this peace and quiet.”

The film’s other half, however, is about someone who desperately needs peace and quiet after seeing too much action altogether. Khaled’s half of the film feels for the most part like a diagrammatically flat—at least, coolly uninflected—account of life for asylum seekers in a country like Finland. We see Khaled take up residence in a reception center; hang out with a new friend, an Iraqi in a similar fix; tangle with yet more racist skinheads; and undergo two interviews with an immigration official. Kaurismäki play these interviews slowly and seriously, with Sherwan Haji giving Khaled’s account of his ordeals in long takes, the camera holding on his largely expressionless, unblinking face (the actor gives a terrifically affecting performance throughout, faultlessly low-key and entirely uningratiating). A bitter note, imbued with an almost Loachian note of real-world outrage, comes when the official heading Khaled’s asylum hearing announces that the court deems Aleppo an insufficiently dangerous place to warrant him staying in Finland; immediately afterwards, a TV news program shows coverage of the bombing of a children’s hospital there.

Helping keep the two strands in parallel is the use of a characteristically Kaurismäkian soundtrack. This director likes to undercut the realism of his dramas by having musicians, solo or in groups, play interludes; maybe it’s also his tribute to the way it was done in old Hollywood. Here he has a number of performances by ageing Finnish rockers and folkies (including gangly greybeard Tuomari Nurmio), all of whom look as if they’d be at home in a Neil Young backing band. They all sound personable, and enjoyably robust, but you wouldn’t want to go out and buy their records (as I did when exposed, by Drifting Clouds I think, to the bleak tangos that are a Finnish specialty). The film has that look, of course, that tells you couldn’t be watching a work by anyone else. That distinctive shade of blue makes its appearance in a shot in the restaurant at night when a slash of light from outside dissects the back wall; Kaurismäki, Salminen, and production designer Markkü Pätilä, also a mainstay, have between them created an Scandinavian counterpart to Edward Hopper’s night scenes. Every shot, even in blandly institutional places like police stations and car parks, has the flat diagrammatic composition that’s a Kaurismäki trademark. And he has a way of making people too become part of the décor. In one scene, two members of the restaurant staff wait outside Wykström’s office to ask for an advance. They stand stock still, one behind the other, as if queuing at an ATM. As one walks in to see their boss, the other shuffles one step forward. Similarly, when restaurant inspectors arrive, Khaled hides in the toilet holding the restaurant’s dog, a hopeful-eyed pooch named Koistinen. Later, having forgotten about them, Wykström opens the door: they’re still there, man and dog, in exactly the same position.

Kaurismäki’s whole approach is altogether too laconic for sentiment as such—although you might get a lump in your throat from the final shot, in which, with almost cavalier blitheness, the film contrives to pull back from what looked like becoming an ironically tragic payoff à la I, Daniel Blake. The director isn’t a sentimentalist, but he’s a big softie, for sure, an incorrigible optimist (although in person, he adopts the guise of a world-class Master of Misery) and an unshakeable believer in people’s mutual decency in the face of inhumanity. He’d just rather they didn’t make a big deal about it, just quietly shook hands, and passed the vodka bottle. Article from the November-December 2017 issue Article from the March-April 2003 issue

Article from the November-December 2017 issue

Article from the March-April 2003 issue