Werner Herzog’s documentary about the Internet, Lo and Behold, is subtitled Reveries of the Connected World, and in the last week, the connected world has shown us some very curious oddities. It has, among other things, given us Herzog’s responses when told about Pokémon Go (“Is there violence? Is there murder?”); and the German sage’s opinions on Kanye West’s “Famous” video, which he perhaps overrates as a revelation of the moving image, but which triggered some curious speculations about the prevalence of döppelgangers online (not least of all, the ever-popular soundalikes who have spoofed his solemn Bavarian tones on monologues about everything from speed dating to Where’s Waldo?).

On one level, you hesitate to expect insights on cyber-age connectedness from a man who refuses even to use a cell phone, but conversely, you suspect that such an inveterate outsider might have the purity and detachment of vision to offer some truly novel insights: a bit like asking Henry David Thoreau to comment on the skyline of Dubai, or St. Simeon Stylites to file a report on Burning Man.

As it is, Herzog has both too much to say about the Internet and too little—too little of coherent and persuasive interest, that is. Lo and Behold isn’t really an essay on the connected world, rather a series of unconnected mini-essays or sketches—none of which individually get us that far, but which collectively leave us saturated with ideas and info, and overall a little confused, and not necessarily in the most stimulating way. The film’s most Herzogian aspects are in the title—the sense of sublime wonder evoked in “Lo and Behold” (just imagine saying those words with the Herzogian long O’s) and the idea of “reverie.” As it is, this NetScout-funded work is one of the least reverie-like of Herzog’s recent documentaries, and the most mundane in its digressive drift from one intriguing topic to the next. 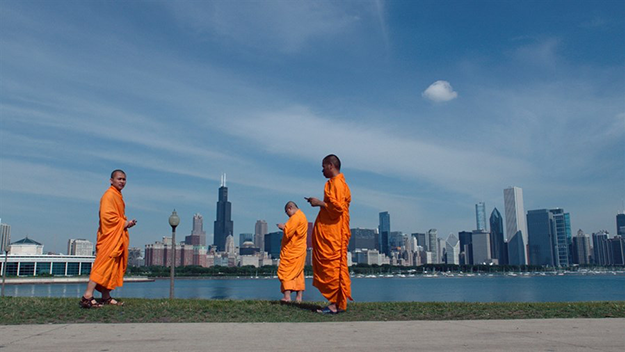 Perhaps Herzog’s structure here is intended to duplicate the rhythms of online surfing, but it means that he never settles on any idea long enough for the philosophical ramifications of his themes to take a hold (even though many of those ramifications are explicitly addressed by Herzog and his host of expert witnesses). Late in the film, one of those witnesses worries that computers are enemies of deep critical thinking, and imagines that a generation brought up with universal connectivity as the norm will be a generation looking at numbers, not ideas. Yet the film’s own low attention threshold means that few of these ideas have time or resonant space to germinate in the viewer’s imagination.

The 10 chapters of Lo and Behold deal with such topics as the Internet’s early days, its glories, its dark side, people who for different reasons live without the Net, the possible end of the Net, the advent of artificial intelligence, the question of where it’s all going. We meet computing pioneers, security analysts, robotics specialists, astronomers, philosophers, banjo players, and some people who live in digital-free isolation in the countryside, because cellular signals are bad for their health. We also meet—in the film’s most frustrating section—the family of Nikki Catsouras, whose brutal injuries in a fatal car accident ended up leaked online and leading to a vicious and traumatic spate of online abuse. Nikki’s mother comments that there is “no dignity or respect” online, and sees the Internet as “a manifestation of the Antichrist.” It’s upsetting stuff, but is that all Herzog has? Is there nothing to say about the motivations and epidemic sweep of online abuse, the rise of revenge porn, all the factors that allow compulsive trolls to vent their sexual and political violence? Clearly, there are many documentaries that could be devoted entirely to these topics, and you could imagine Herzog making a fascinating one, but to select only one grim episode to represent “The Dark Side,” as this chapter is called, is infuriatingly cursory.

The film starts nicely with shots of the UCLA campus where the first host-to-host message was sent to Stanford in October 1969—a moment that scientist Leonard Kleinrock, who was there, compares to the entry in Columbus’s log indicating the sighting of land. There’s a certain holy tone hovering over this section, which Herzog, perhaps with amused irony, sets to Wagner’s Rheingold overture. Kleinrock talks about the reconstructed room (“some sort of a shrine,” as Herzog calls it) where “the critical events of the origin began.” The film’s neatest revelation—you almost hope that it’s apocryphal, it’s so neat—was that the first message sent was supposed to contain the word “Log” but the connection crashed before the G, resulting in a prophetic “Lo.” There are some rich philosophical and theoretical insights offered here, but for the most part, Herzog is in such a hurry to get to his next pundit that he rarely loiters too long on one question, or even pushes his questioning so that we know what’s really at issue. Internet pioneer Ted Nelson talks about his ideas of flow, inspired by his experience of watching the water around his hand as he dangled it from a boat: “The world is a system of ever-changing relationships and structures.” Fair enough—but then we also hear that Nelson is widely considered crazy for tenaciously pursuing his particular view of connectedness when other scientists see things differently. Why exactly? What is so radically different about his approach? We never quite get the chance to grasp this because Herzog is too caught up in the camaraderie of chatting with interesting subjects: “To us,” he tells Nelson off screen, “you seem to be the only one who is clinically sane.” Nelson beams, the men shake hands and chuckle. It struck me here that, for all his prowess as an investigator and a master of offbeat insight, in straight documentary terms Herzog is simply not a very good interviewer; he doesn’t press people to pursue points or explain themselves in depth, and he doesn’t always look for the most fruitful way to keep himself out of the picture. The same happens when, later in the film, he harps on his perennial theme of dream (does the Internet dream of itself, he wants to know), or when he asks security analyst Shaun Carpenter: “Can it be that right now we are in the middle of a cyberwar that we don’t even notice?” “Sure,” says Carpenter—and the matter rests there.

The film rushes on from one talking head to another—“Meet Laurence Krauss, he’s a cosmologist…”—and though we don’t always get a chance to understand in detail who they are and what they’re contributing to the overall argument, many are at the very least highly entertaining. Particularly personable is hacking “demigod” Kevin Mitnick, who argues that the real weakness in security systems lies not in technology but in people, and tells of cracking Motorola’s defenses by chatting to a few credulous office workers on the phone. There’s Adrien Treuille of Carnegie Mellon University, where a lot of Herzog’s material is filmed, who compares complex molecular structure and shirt folding. And there’s Joydeep Biswas, who works with robot football players at Carnegie Mellon; the players are actually cylinders on wheels, like little self-propelled dustbins, and Biswas speaks with particular fondness of Robot 8, his project’s own Messi or Ronaldo (Robot 8 has its own idiosyncratic look too; it’s the one with four green dots on top). We see another robotics project too, and a robot “chimp” dangling in mid-air, testing its limbs, “eyes” swiveling all around. Would robots dream? Yes, theoretically, using information supplied by other robots. At this point, I thought it would be interesting to have an entire Herzog documentary about robots; and better still, how great it would have been if he, not Spielberg, had completed Kubrick’s A.I. project. Imagine a robot hero discovering an unfamiliar world, like a cross between Kaspar Hauser and WALL•E.

Among the film’s side riffs: a section on solar flares, which could theoretically do drastic damage to cyber-communications globally; some discussions with the oddly smooth and affectless but clearly hyper-lucid Elon Musk, about colonizing Mars; and a little fantasy about Chicago abandoned by a generation of space pioneers, leaving only Buddhist monks to wander its plazas. Inevitably, Herzog’s apocalyptic imagination comes to the fore. Towards the end of the film, an interviewee asks: “Will our children’s children’s children need the companionship of humans? Or will they have evolved in a world where that’s not important?”—then concludes, most inconclusively, “It sounds awful. But maybe it’ll be fine.” Well, we can imagine how Herzog feels about this prospect. At the very end of the film, he cuts back to a scene glimpsed earlier, from Green Bank, West Virginia, where because cellular signals can interfere with the local radio telescopes, they don’t have phone masts—and where folk musicians gather in an idyllic pre-smartphone arcadia. For Herzog, players swinging together in an intricate bluegrass hoedown is clearly his idea of true human connectivity—a form of collective telepathy without machine mediation. There’s no shortage of ideas here, just a lack of imaginative space in which to muse on them. Documentaries about complex social and technological ideas can be breathless and crammed to bursting, yet still guide you through their complexities, either because they allow the viewer to free-associate, to riff for themselves on the ideas presented, or because they guide you expertly through their narrative argument. I didn’t much care for this year’s Zero Days, Alex Gibney’s cyberwar documentary, but by the end I felt I’d extracted enough from its informational onslaught to feel that the film had adequately communicated its central concerns. I even found myself understanding far more than I would have expected about CERN and the Higgs boson particle as a result of watching Peter Mettler’s The End of Time.

In Lo and Behold there are few ideas that feel truly revelatory or arresting, partly because these days we’re all constantly reading about the Internet on the Internet—which is perhaps a prime example of the damn thing dreaming about itself—but partly also because this feels like a very flat, mundane assemblage of images, facts, and ideas. Here is a documentary almost entirely without texture, which is a rare thing for Herzog. It’s a film which thinks, but doesn’t itself dream, or allow us to. The initial “Lo and behold!” becomes a mere info-sated “Hey wow!”