Film of the Week: Eisenstein in Guanajuato The case of Peter Greenaway, which comes round every now and then, invariably proves to be a troubling one—not least for those of us who were once bowled over by the British filmmaker’s inventiveness and sheer individuality. At the peak of his visibility, Greenaway managed to pull off a near-impossible feat, successfully operating as a cerebral conceptualist within the normally conservative waters of British art cinema.

Greenaway’s 1980s films were narrative on a relatively accessible level, but they were only incidentally about story: “Cinema is far too rich and capable a medium to be merely left to the storytellers,” he once declared. Instead, his films’ narratives have usually been generated—just as certain modern musical compositions or literary texts have been generated—by non-humanistic procedures such as the use of taxonomies or series, or else they derived their shapes and content from wordplay, art-historical subtexts, or philosophical propositions, most often about sex and death. For Greenaway, story is essentially a by-product of the tension between viewer expectations and the inherent resistance of ideas to being narrativized or psychologized in a facile or conventional way.

Meanwhile, the abstract thrust of Greenaway’s films was offset by their often lush beauty (especially when photographed by the late Sacha Vierny), the result of the play-off between the director’s scholarly fascination with art history (the Renaissance, the Dutch Golden Age) and his penchant for hyper-formal structuring, for posed tableaux and exaggerated symmetries. In the 1980s and early ’90s, I would have considered myself a hardcore Greenaway supporter, relishing the way that he proposed so many challenges to the conventional wisdom, especially in Britain, of what narrative films should be. But for me, his work started to go badly wrong once it ceased to take into account the pleasures of a possible audience. No one would ever have expected him to pander to the hypothetical lazy viewer that film industry commonsense is forever invoking. But his films became increasingly hard to read, even on the level of untangling the compositions within a cluttered shot: facing the frenzied rush of stimuli and information in The Tulse Luper Suitcases (of which I’ve only ever managed to see the first part, 03) was like having your brain speed-crammed with cross-indexed alternative histories. Unlike his ’80s films, which were both complex and visually alluring, little of his later work has seemed designed for a viewer who was not Peter Greenaway.

In recent years, Greenaway has been more convincing as a visual artist, often making interventions into existing art works: he’s invented a form of son et lumière projecting onto Old Masters at events such as the Venice Biennale, while a 2004 installation at the English country house of Compton Verney, part of his overall Tulse Luper mythos, was immersive and mesmerizing. I wish I could feel as enthusiastic about Greenaway’s follow-up, a tribute to one of the few filmmakers (along with Alain Resnais) whom he has consistently praised in the course of his regular denunciations of cinema as a stillborn art. Eisenstein in Guanajuato­ is an English-language Dutch-Finnish-Mexican-Belgian co-production (even Greenaway’s funding structures sound conceptual), and it follows Sergei Eisenstein during his 1931-32 trip to shoot his uncompleted portrait of a nation, ¡Que Viva Mexico!. But this film is not so much about the Soviet maestro’s work there, or in any conventional sense about his discovery of Mexico, its people and cultures; it’s more about the Russian’s sexual affair with a young Mexican man, and his supposed anal deflowering, during what Greenaway, riffing on the U.S. title of October, calls “10 Days That Shook Eisenstein”.

We know that Eisenstein was a joker, with a ribald sexual imagination: Greenaway’s film takes its cue both from the Russian’s erotic cartoons, briefly animated here, and from the famous shot of him larkily straddling a phallic cactus. But it’s hard to imagine that the real Eisenstein was quite as loopily flamboyant as the version presented here: played by Finnish actor Elmer Bäck in a white suit and unruly shock of elevator-shaft hair, Eisenstein comes across like a louche, self-satisfied rock star. He presents himself like the protagonist of a picaresque farce, commenting on his woes (“I come accompanied by flies”), his artistic stature (“I am a boxer for the freedom of cinematic expression”), and his self- image (“I have the correct physiognomy for a clown”). He’s also a pathological name-dropper, a tic in common with the film itself—we’re forever hearing about the likes of Mayakovsky, Dalí, Cocteau, the Gish sisters, Pudovkin, Pasternak, sometimes with photos of the real people dropped into the frame. In all fairness, as there’s a reference to Eisenstein’s habit of name-dropping, all this could be a joke at the expense of his snobbish impressionability, as well as a parodic tilt at the “Have you met Chopin?” school of historical biopic. In practice, it gives the film the breathless flavor of an illustrated Wikipedia entry.

Eisenstein’s experiences in the Mexican city of Guanajuato shake him, all right—his digestive system above all. He’s barely arrived before he’s puking fountainously over his shoes and running tap water over his ass following an incident of diarrhea. He doesn’t only spout bodily fluids, but—even more copiously—philosophy, delivering unwieldy apercus. “Death in Russia is a shabby meeting at life’s end—here in Mexico, death comes bright-eyed and sober…” he says, before musing on “Sex and Death, the two non-negotiables, Eros and Thanatos.” All these cogitations have the unmistakable Greenaway ring, and their distinctly unlapidary nature makes even the more intriguing ideas feel clunky and mundane. Filmed partly in long shot, again like a stage tableau, the scene shows Cañedo penetrating Eisenstein, who winces in pain, then realizes that his ass is bleeding. “Don’t worry,” Cañedo reassures him. “Small broken injured capillaries in the sensitive anal interior sphincter—recovery almost immediate.” He goes on to lecture Eisenstein on the global trajectory of syphilis, once known as the “Mexican disease,” and on how the lands we think of as the “Old World” and the “New World” should really exchange labels. Not unreasonably, Eisenstein protests: “And you tell me all these things while your prick is in my arse?”

The Russian appears to experience his tryst as a decisive awakening—“Someone has opened a door to a wet and weeping dirty hurricane”—but it’s hard to see how it affects him as a filmmaker, or enhances his receptivity to Mexico. Apparently it makes little difference: invited to film a nearby mudslide, he protests, “I’m not so good with reality—I’m going back to bed.” Given the brutality of the sex scene, which ends with Cañedo planting a red flag between Eisenstein’s buttocks, it’s hard to know quite what’s intended by this symbolic rape of a cultural hero. Sex has almost always been brutal and punitive in Greenaway’s films, and even when it affords pleasure—as in, if I remember right, The Draughtsman’s Contract (82)—participants tend to pay dearly. Quite apart from the question of whether Greenaway’s film is in keeping with the facts about Eisenstein’s sex life—critic and silent-cinema specialist David Robinson has argued that it very much isn’t—it’s hard to understand quite why Greenway wants to put his great cinematic hero through such rough treatment. As Robinson points out, one thing that we see Eisenstein do very little of is make his movie—although we’re told at the end that he shot 250 miles of it in Mexico. Greenaway gives us plenty of luscious images of Mexico, especially of the more exotic sort: as you’d expect, a great deal of the Day of the Dead, and of Guanajuato’s famous mummies. But it’s only in places—notably, in some early black and white landscape shots—that Greenaway evokes the simple, forceful imagery that Eisenstein captured on his travels with associates Grigori Alexandrov and Eduard Tisse.

What Greenaway does, however, at times quite magnificently—together with regular collaborators, DP Reinier van Brummelen and editor Elmer Leupen—is to expand on the visual and rhythmic vocabulary of what we think of as the “Greenaway film.” The frames within frames come early on, using footage from Eisenstein’s films; there are lots of split screens, sometimes multiplying a single image and repeating a single snatch of dialogue. More intriguing are the games with space. There’s a stunning shot in which the blazing gold walls of a cemetery start by being bent back to offer a 180-degree landscape view, before folding themselves back into a straight line; and a long track past the colonnades of a restaurant, to show a group of actors seemingly occupying several positions simultaneously. But it’s not always easy to gauge the rationale for such effects, and it’s especially hard to see how, or whether, they are responding to or commenting on Eisenstein’s own innovations.

The clumsiest thing here is the characterization of two Americans—Mary Craig Sinclair, wife of the novelist Upton Sinclair, who helped bankroll Eisenstein’s jaunt, and her brother Hunter Kimbrough. They’re played respectively by Mexican actress Lisa Owen and South African actor Stelio Savante, and both depicted as cartoonishly crass: Mrs. Sinclair is a braying virago in crimson satin jodhpurs who calls Eisenstein “Sir Guy,” while Savante’s Kimbrough (“Ah now take ovah”) could be out of a shaky student production of Tennessee Williams. Of course, knowing Greenaway, all this could be part of a militant rejection of naturalism—but it still sets the teeth on edge. 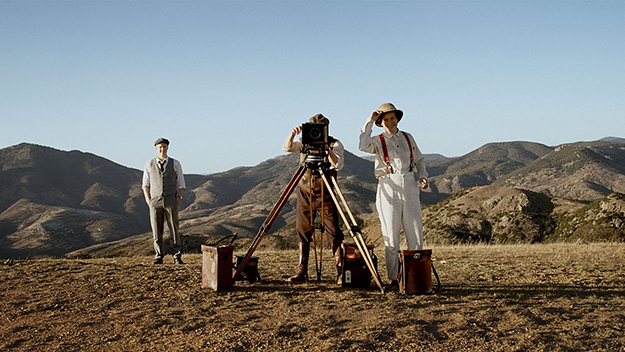 Eisenstein once famously called Lewis Milestone’s All Quiet on the Western Front  “a good Ph.D. thesis”—and at least one critic has invoked the line in reference to Greenaway’s own soberly academic tendencies. Eisenstein in Guanajuato doesn’t come across as rigorously as a Ph.D. thesis. It’s more like the kind of waywardly expansive text that scholars sometimes produce when they spin off into the realms of lawlessly free-associative Discourse, with a capital D. Greenaway still goes heavy on the (visual) footnotes, though. Article from the July-August 1991 issue Article from the July-August 1991 issue

By Nestor Almendros
Originally published shortly after the fall of the USSR, renowned director of photography Nestor Almendros considers Sergei Eisenstein's life, work, and legacy
Subscribe to the Magazine