Film of the Week: Days The face and body of Lee Kang-sheng make up one of cinema’s great timepieces. All screen actors with long careers have features and physiques that we can watch as they develop over time, some changing more than others, some doing their utmost—sometimes tragically, sometimes absurdly—to resist change altogether. But the history of Lee Kang-sheng’s physical being has been written large since his first appearance in a Tsai Ming-liang work, 1989 TV film All the Corners of the World, and that history has essentially been the key theme of a filmmaker who has said that without Lee’s presence on screen, he would find it hard to make films at all.

For devotees of Tsai’s cinema, it has been an extraordinary experience watching the ageing process at work on Lee, from the willowy naïf of early films like Rebels of the Neon God (1992) to the haggard, weather-beaten everyman of 2013’s Stray Dogs, as if the wear and tear visited on his characters by time, toil, desire, torrential rain, and bad plumbing had left their indelible trace on Lee Kang-sheng himself, giving Tsai’s cinematic studies of him unusually high existential stakes.

Having put Lee through particularly harsh rainy rigors in Stray Dogs and demanded fearsome Zen discipline from him in the series of slow-walking performance films that included 2015’s No No Sleep, Tsai Ming-liang seems to give Lee some welcome respite in his new film Days, which played this week in the Berlinale competition. It’s always tempting with Tsai’s films to say that he has pushed his minimalism to new limits. That’s not strictly true here, since the Walker series, with Lee as a Buddhist monk, was his ultimate statement in that respect—unless of course you count 2015’s Afternoon, in which Tsai and Lee sit in a room, the director talking and his muse pretty much silently listening (or perhaps barely  listening at all).

But among Tsai’s narrative features, Days is certainly the most spare—if this is strictly a narrative at all. It’s effectively a series of shots, making up a sequence of brief episodes involving two men, who finally come together in a slow, silent encounter. Small details allow us to infer a skeletal narrative, if we want to: we have at some point to decide that Lee’s character has travelled from his rural home to the city, apparently Bangkok, and that the size of the suitcase in his hotel room might mean that it’s a long stay. Otherwise, there’s not much factual thinking we need to do—and no dialogue, apart from a handful of barely audible muttered words (including “Thank you” in English), and no subtitles either, as an opening caption warns us. 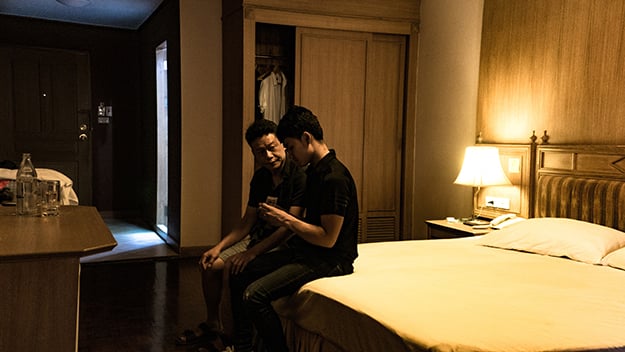 Lovers of Tsai’s cinema may have feared that he wouldn’t make any more Tsai Ming-liang films again, not as we’ve been accustomed to thinking of them. Recent studies Light, Your Face, and Qi Ri pursued his fascination with buildings and with the physical presence of people other than Lee, but didn’t have the stark contemplative magic of his best work, while VR experiment The Deserted, featuring Lee, a ghost, and a fish, was fascinating but its clunky simulation of 3D space felt like a distraction from the mystery of its tableaux.

There are, however, no distractions in Days. The film begins with an exceptionally long (I estimated seven minutes, but it could have been 10), absolutely still shot of Lee Kang-sheng sitting in an armchair, seen through a window, gazing out at heavy rain; the light darkens slightly as the shot proceeds; Lee stares ahead, seeming rarely to blink. There’s virtually nothing to look at except Lee, the light around him, and the elegance of the composition (the reflection of a balcony outside creates a white line that runs across the screen, through Lee’s head). Another, shorter shot of Lee finds him equally motionless, this time lying in a bath, gazing upwards. After a majestic landscape—a tree against a blue sky, and a cloud-filled rural valley—we cut to a room in a city, and a young man in pink trunks (he’s credited as Non and played by Anong Houngheuangsy).

Non spends several scenes preparing himself a meal of fish and salad: preparing a coal fire to cook on, washing the ingredients, shredding a cucumber. This section of the film feels like Tsai’s answer to the potato-peeling marathon of Chantal Akerman’s Jeanne Dielman, a detached portrait of a day’s culinary work, here spun out to a Zen slowness, but always painstakingly framed by DP Chang Jhong-Yuan (Non’s kitchen is seen from two angles, one very low, making his near-naked body all the more athletically eroticized). By contrast with the blank, almost featureless modern space inhabited by Lee’s character (identified in credits as Kang), we get to know the ragged details of Non’s environment intimately: the wooden panel that patches up a door, carrying a brightly colored scrap of the logo of some product or other; the pink plastic dish leaning against the wall; the double image of two naked women on a 2015 Isuzu diary. In fact, later, there’s a beautiful visual rhyme: Non asleep on his mattress, with Union Jack and Stars and Stripes pillows, his body aligned perfectly with the women’s partly obscured bodies on the wall. Each man’s days include particular incidents. Non stands by the side of a motorway waiting for a bus: a simple shot that derives a subtle painterly charge from the fact that a single row of raindrops, apparently hanging off the rim of a roof or window frame, runs along the top edge of the screen (other images are given an extra spatial dimension by being shot through grilles or between metal bars, even though we may not immediately notice it). We then see Non at a night market where he apparently works, although he seems mainly to hover with uncertain intent. And Lee is seen in a series of shots that map his body at different angles, undergoing treatment for a neck problem. We see his face from below, close-up, his head held in a brace, then his body from behind, his back covered in acupuncture needles, plaques of metal, wires leading to some electrical contraption, and large pellets smoldering like marshmallows on a barbecue (Lee Kang-sheng’s real-life neck problems have been a constant theme in Tsai’s work: The Departed saw him treating himself with some similarly dramatic gizmo).

Later, we see Kang in a comfortable-looking hotel room (we guess the location is Bangkok, from the city’s green and yellow taxis and a street sign later on). He strips down the bed, and is then seen on close-up lying naked face down; someone starts to massage his body with oil, feet first, then moving up his legs to his buttocks and back. It’s only after a while that Non, wearing only Calvin Klein’s, comes into shot, and it’s a bit later still that a casual tossing aside of those CKs, which land in blurred focus at the darkened back of the bed, confirms that the scene’s erotic dimension will flourish exactly as we suspect. By this time, Kang is on his back, and his features—famously, among the most impassive in all of cinema—start to register a gentle, almost grateful rapture. The scene ends with few words, including that quiet “Thank you” on Non’s part—and then the giving of a most unlikely gift that Kang produces from a large brown envelope. It’s a tiny wind-up music box, and the music it plays in a slow, mechanical tinkle is Charlie Chaplin’s Limelight theme. We hear it twice in the film, and both times it’s magical because there’s an absurdity—and yet, absolute candor—to something so precious, almost kitsch and childish, being produced in such a worldly context. The tune it plays replaces spoken language between the two men, becoming an extension of the physical, emotional connection that they make.

This Berlinale was laden sometimes oppressively with prolix language (the bureaucratic reports of Radu Jude’s excellent Uppercase Print, the agonizing theological-philosophical divagations of Cristi Puiu’s Malmkrog) or with the spectacle of rampant emoting (Ilya Khrzhanovsky’s DAU: Natasha, Sally Potter’s emptily histrionic psychodrama The Roads Not Taken). In such a context, Days was a reminder of the profundity and the emotional eloquence of stillness and near silence: this is a film where you can sit at length marveling at the curve in a country road at night. One image in Days is perhaps the ultimate distillation of Tsai’s ability to freeze a moment: a simple extended shot of the surface of a building with distressed windows, apparently peeling with some reflective coating, mirroring a faint (evening?) sun. There’s nothing to see in conventional terms—until, that is, you start to see it, and notice the tops of reflected trees waving in the wind, then the silhouette of a cat or some other animal running.

Days is not purely about the pleasure of losing yourself in images. As usual with Tsai, it’s also a story about work, hunger, money, the troubles of the body, the abrasions of city living. But it’s also about the possibility of love, tenderness, at least the giving and receiving of pleasure. On the contemplative, painterly level, however, it is an affair of pure rapture, albeit of a refined, muted variety. On one level, Days has its dimension of clear-sighted socially specific realism, but it would be no misrepresentation to see the film, on another, as a full body massage for the soul.