Flight of a Bullet

“Life wins over the movie,” said the director of Flight of a Bullet, a standout at this year’s True/False Film Fest. Filmmaker Beata Bubenec was describing why her tense handheld dispatch, which begins at a blown-up bridge in embattled Eastern Ukraine, detours into an interrogation at a makeshift base and dissipates into ornery chatter among bored and aggrieved soldiers. But her turn of phrase at a Q&A neatly captures the flickering of chance and opportunity at the heart of so much nonfiction cinema, as directors frame, shape, and filter what transpires before them, dependent on that X factor of spontaneity and found reality.

This year, it certainly felt as if that X factor was lending itself to more boundary-pushing work than in recent memory. Well-positioned in March as both top-of-the-calendar curator of Sundance 2018 documentary and importer of international films from Singapore to Amsterdam, the Missouri-based festival again rolled out challenging work: the single-shot, ethically thorny Flight of a Bullet; the gallery-derived iterative portrayal of workplace meetings in The Task; the almost classical example of slow-cinema doc Self-Portrait: Birth in 47 KM (before it ascended into performance art); a skin-crawling up-close-and-personal visit with a homebody oldster lech, in the medium-length Antonio e Catarina. To my perennial shame/joy as a New Yorker who has attended his share of near-empty hometown rep screenings, these small films also attracted healthy crowds from this 120,000-strong university city, packing a converted church or hotel ballroom as well as grand theaters such as the Missouri. As a critic, one can coast on the fumes of palpable audience curiosity for quite a while (all the way up to the point when someone asked The Task director, “Could you explain, what the fuck was that?” in an exchange gallantly annotated by the moderator: “I’m personally reluctant to ask an artist to do that, but…”).

Bubenec’s war-zone film gripped the small crowd with whom I watched it, dropping us in media res at the thoroughly dicey Russian-Ukraine conflict. The eerily still scene of destruction invites our rapid, nervous reading of the signs: was this the result of a storm or a shell? Will another shell be forthcoming? Who is this rogue in shades who is filming the wreckage? Is our own conduit (Bubenec) foolhardy to explore where she is not wanted? The whole scenario—which could and probably will be plucked wholesale for a fictional thriller—neatly captures the violence and frontier justice at work when the scene transitions into a car ride at gunpoint with a detained man. But Bubenec’s coup—one of focus and selection (from hundreds of hours of footage)—is to latch onto a soldier at the building where the hapless prisoner is taken, and to listen in on his abusive and ragingly self-pitying cellphone call with a girlfriend back home. It’s an instant window into how the violence of war pervades life (and aggravates and enables male aggression). Bubenec’s camera is like a shield; as other soldiers hit on her (which, when there are guns, doesn’t really quite feel like idle flirting), we see the outlines of a reflexive portrait of a tough-as-nails cameraperson. The backstory is even more complex and conflicting (just for starters) than the sinuous camerawork and on-the-fly storytelling might suggest, and it’ll surely be eye-opening to see whatever Bubenec pursues next. Meanwhile, in another kind of war zone—the electorally challenged DRC—Kinshasa Makambo opens on a day in the life of a concerned human being: a young man wakes up, brushes his teeth, and heads to a protest. This is routine under president-for-life Joseph Kabila, as democratic revolt followed his suspension of the 2016 election—all of which is portrayed in this masterfully compressed and elegant picture of civil struggle. Shooting without the knowledge of the authorities, Kisangani-born director Dieudo Hamadi combines run-and-gun street coverage with behind-the-scenes activist confabs and unheralded doses of heightened lyrical realism: an overhead shot of one protestor at work in a field of trash, or a vision of protestors in homemade plastic-bottle gas-masks. Hamadi’s economy of means and narrative produces a fleet cross-section of revolt and counterrevolt in action, with no time for false cheer.

Not that all is well in the worlds within Western democracy, and The Task, orchestrated by studio artist Leigh Ledare and originating as a Chicago Art Institute installation, simulates a particularly enervating subset of discourse: the circular firing range of a workplace consciousness-raising meeting, laid low by posturing and confusion. Skewered by multiple cameras in a room full of chairs containing progressively weary participants of all ages, it’s something like watching a 30-person jazz improvisation, with traded solos in aggrievement and encouragement and bemusement. Most viewers will be reminded of group therapy, but the actual nature of the meeting or their putative company or project is as purposeful-and-inscrutable as a Cremaster sequence. Ledare calls it “a giant feedback machine,” but he’s also fashioned a mischievous, borderline inflammatory riff on the contemporary psychosocial whirlpool of conscientious discourse that can decay into passive-aggressive backbiting; on screen, it creates a kind of distant descendant to the emotional openness of early-70s counterculture self-interrogation, with all its casualties and more.

A separate shout-out goes to the wolf-howl-into-the-void in crowd-pleaser sheepskin, Lovers of the Night, an apparent piece of fluff about a monastery and its ageing adherents. On the sunny side, you get frisky elderly Irish monks quipping and cheering rugby on TV; on the darkening side, filmmaker Anna Frances Ewert draws an unmistakable line from the voluntary self-abnegations of their spiritual pursuits to the involuntary sacrifices imposed by age. Leilah Weinraub’s Shakedown circles another very different and differently endangered community, a black lesbian strip club in early-2000s Los Angeles, diligently chronicled here with chill interviews, piles of ephemeral flyers, and happy footage from the dance-floor. The sometimes lo-fi effect is of fleeting glimpses of private-public moments of hang-out time, freedom, and fun (at least until the police crack down). True/False 2018 also hosted the much-anticipated world premiere of Khalik Allah’s Black Mother (which you can read all about here), as well as the usual rituals of a festival that has handily and healthily planted deep roots in its community. One such ritual, at the far end of the festival, when all is nearly said and done, was Toasted—a small-hours closing-night panel in a waffle bar that I was invited to turn into a Film Comment Podcast (which you’ll be able to hear anon). The participating critics and filmmakers made it a little less predictable than the Academy Awards that wrapped the same night, by which time True/False had already celebrated cinema with its own brio. By Nicolas Rapold
As eclectic and respected as ever, the Missouri festival presented another cannily curated slate of films drawn from around the world, but does its reputation hold up? 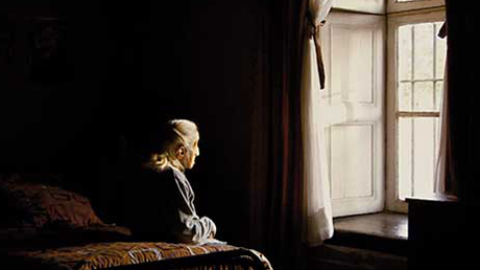 By Nicolas Rapold
The small, no-coast documentary festival that actually lives up to its hype

By Nicolas Rapold
As eclectic and respected as ever, the Missouri festival presented another cannily curated slate of films drawn from around the world, but does its reputation hold up?

By Nicolas Rapold
The small, no-coast documentary festival that actually lives up to its hype