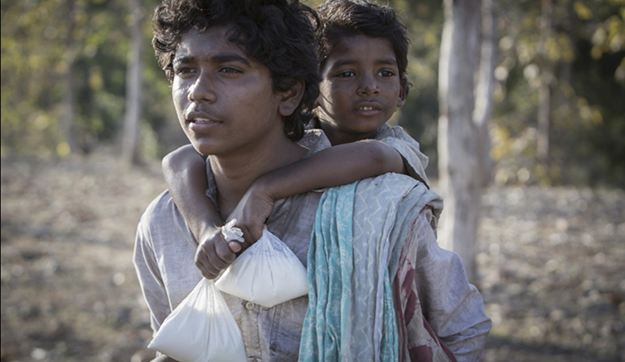 Lion tells the harrowing fact-based story of a 5-year-old boy from an impoverished hamlet in central India who gets separated from his older brother after a train ride to a nearby city and winds up at the chaotic Howrah Station in Kolkata (the former Calcutta), roughly 1600 kilometers away. Unable to read or write or to speak Bengali dialect or even to provide his mother’s or his own correct name, he rebounds from the teeming city’s mean streets to a Dickensian orphanage and from there to a loving home on the Australian island of Tasmania, with his adoptive parents Sue and John Brierley (Nicole Kidman and David Wenham). A nail-biter with no artificiality, filled with sentiment that elicits honest tears, Lion becomes a stirring quest movie when the grownup Saroo Brierley (Dev Patel) embraces a wave of primal feeling and resolves to find his hometown and his birth family.

The director, Garth Davis (who made four episodes of Jane Campion’s miniseries, Top of the Lake), and the screenwriter, Luke Davies (also a novelist and poet), have used adjectives like “epic” and “mythical” to describe their attraction to the material. The movie does exert a visceral pull and surrounds audiences with its spaciousness and sweep, but I think its accomplishment goes deeper. Davies wrote a script grounded in the experience of the 5-year-old, Saroo (Sunny Pawar), letting his tragedy unroll from the boy’s own perspective. When Davis read it (as he told The Hollywood Reporter), “Wall-E was somehow floating around in my head — that little robot wandering around that post-apocalyptic landscape.” Working close to their instincts and at the peak of their abilities, the filmmakers intimately chart the growth of a character’s awareness from a child battered by events to an adult who welds together mightily different aspects of his life.

Lion does exactly what the movie version of this real-life saga (based on Brierley’s memoir, A Long Way Home) should do. It demonstrates the power of an individual to reclaim his past and to merge legacies from two different cultures. Because it’s cathartic and optimistic, it also leaves us remarkably clearheaded. Saroo refers just once to a brother named Kallu, but the filmmakers ignore that character and merely touch on his sister Shekila in order to concentrate on Saroo’s closest sibling, Guddu (Abhishek Bharate), and their mother, Hamla (Priyanka Bose), who works as a laborer, moving rocks on construction sites. Davis and Davies focus the material without distorting it. While weaving their own sturdy visual mesh, these storytellers immerse us in the boys’ world and tie us to their fraternal bond. The credit sequence is like a lyrical overture: the camera floats above Tasmania’s dramatic shoreline, then hovers over treetops that could be from Australia or India before lighting down on the arid, hilly landscape of Saroo’s native turf. Saroo is roaming through a valley filled with butterflies, and when he raises his arms in delight, it’s as if he’s making a blessing or a prayer. Soon Guddu comes calling, and the pair hop a train to steal some coal. To Saroo, Guddu is a hero, able to outwit guards and soldiers, defiantly standing upright on a coal car as the train enters a tunnel. Early on, without the self-conscious use of a subjective camera, the filmmakers insinuate Saroo’s perspective, mixing shots taken from his close-to-the ground eye-line with medium shots of him and Guddu and far wider views that stun us with the challenges of survival these boys face every day. By the time they take the fateful trip that will alter their destinies, we share their pulsing connection and Saroo’s fright when it’s severed.

Lion goes beyond the feel-good climaxes of its inspirational genre. The filmmakers use their own complex sensibilities to convey the birth of one complicated consciousness. What makes Lion extraordinary is the director’s gift for expressing confusion and blurred states of being, for what people do when they’re not thinking and for what they remember without trying. Because of the magic Davis works with Pawar as young Saroo, we understand why the boy, after pleading to accompany Guddu on a nocturnal expedition (sweeping underneath train seats for abandoned goods and change, then scavenging and begging for work for as long as a week), would be so elated and exhausted that he simply falls asleep at their destination. When Saroo awakens on a platform bench, he doesn’t wait for his brother, as instructed, but in a panic, crying out for Guddu, he clambers into an empty car on a train that resembles the one he took before. When the engine starts up, he’s unable to get out, and Davis keeps his camera locked in with Saroo so we comprehend his escalating distress and dislocation.

This long ride is the beginning of a journey that ought to be called an odyssey. It’s a modern odyssey, though, equally physical and psychological. As the action ripples out from India to Australia and then flows back again, Saroo burrows deep within himself to find out where he fits in and who he is. Because of Davis’s and Pawar’s supple grip on Saroo’s resilient character, the movie never sinks into “misery porn.” We get to know Pawar’s big-eyed, luminous face so well that he’s able to convey with the slightest shift of expression when Saroo knows that adults, including one who insidiously cozies up to him, are up to no good. Saroo’s sensitivity is a source of strength. The filmmakers simultaneously test him and reveal his sturdy fiber, so they can portray, say, his escape from mysterious adults who round up a gang of street urchins, or his response to a boy in an orphanage class who bangs his head against the wall, without hyperbole or melodrama. Lion contains more than one head-banger. After Saroo settles into his Tasmanian home, the big-hearted Brierleys adopt a brother for him, Mantosh, who responds violently to direction or discipline, and then punishes himself. The film trains a penetrating eye on the challenges and heroism of adoptive parents, and Kidman, in a brilliantly layered performance, stands up to the close scrutiny. She establishes Sue’s tender bond with Saroo from the moment she gazes at him with maternal rapture when cleaning him up in his first bath. In a fluid acting partnership, Kidman and Patel sustain their intimacy when the narrative jumps ahead 25 years.

The casting of Patel is almost too good to be true. The actor who burst on the scene in Slumdog Millionaire, as a gutter-bred teenager exploiting every piece of knowledge he has gleaned to win a game show, and then anchored two crowd-pleasing films as the manager of the Best Exotic Marigold Hotel, here grows into a confident, take-charge man who is pursuing a degree in (what else?) hotel management. Patel displays his acting mettle when Saroo’s past breaks into his consciousness on tides of recovered memory. Saroo develops an unstoppable desire to find the hometown he knows only by a child’s phonetic rendering, and to locate what’s left of his original family. (He keeps it from his Australian parents.) Few actors have brought more dynamism or texture to a “haunted” character than Patel does in this role. And Kidman matches Patel with a radiant dignity. As Saroo becomes increasingly obsessed, shutting out his Australian family and the most understanding girlfriend imaginable (Rooney Mara), Sue refuses to honor his guilt-clouded presumptions that adopting two Indian children has ruined her life. Saroo is not the only character with a sense of destiny. Kidman turns Sue’s devotion to adoptive parenthood, and her confession to Saroo of a revelation she had in adolescence—a variation on the book’s account of a “vision” that “left her feeling like an electric shock had gone through her”—into a moment of genuine transcendence and clarity. Patel answers her acting challenge with his own formidable powers of belief.

The greatest liberty the filmmakers take is to depict Saroo’s resurgent memory as the result of a Proustian moment: while socializing with Indians at the international hotel management college, he responds to the look, smell, and touch of an Indian cookie, a jalebi, the way Proust did when he bit into a madeleine. According to Saroo’s memoir, he actually retained and treasured his memories of India throughout his young life; he simply didn’t tell anyone about them until he started talking to his hotel-school classmates. He feared that Sue and John Brierley would reckon that he longed for a family love they couldn’t give him or for a country that was no longer his own—which is why, in the film, he doesn’t explain to them why he sacrifices so much of his life for a search he conducts on Google Earth. Even so, this section of Lion is splendid. We realize that the first half of the movie, superb in itself, has also been marvelous preparation for Saroo’s crusade to reclaim his past and make himself whole. The valley filled with butterflies, his bliss with Guddu and the mother he knows only as his ami, the desolation he felt on the train that stranded him in Kolkata, he now sees as part of what makes him him. It’s as if he’s repopulating his own history.

Davis stacks his supporting cast on both continents with aces. Mara brings a clear-eyed sympathy to the underwritten role of Saroo’s lover. Divian Ladwa is volcanically potent as the adult Mantosh Brierley, and Bose, as Saroo’s birth mother, manages to be heartbreakingly eloquent with just a few words.

Lion is dramatically complete. Saroo fills T.S. Eliot’s prescription: “We shall not cease from exploration / And the end of all our exploring / Will be to arrive where we started / And know the place for the first time.” The film ends with that contemporary movie rarity—an authentic and overwhelming display of gratitude.