Are You Talking to Me?

This article, part of our coverage of NYFF59, appeared in the October 6 edition of The Film Comment Letter, our free weekly newsletter featuring original film criticism and writing. Sign up for the Letter here. The Japanese director Ryūsuke Hamaguchi likes sections and segments. His rigorously constructed films come with built-in dividers, sometimes in the form of hard breaks between self-contained episodes—as in the tripartite anthology Wheel of Fortune and Fantasy, with its 40-minute chapters—and elsewhere via the judicious use of ellipses to variably collapse, distend, or mystify narrative time, as in the three-hour epic Drive My Car. Both movies reflect their maker’s interest in blueprinting through their titles, with Wheel unfolding as a sort of Venn diagram whose miniaturized melodramas overlap in seriocomic tone, theme, and style, while Drive My Car traces a resolutely linear trajectory, symbolized by the cherry-red Saab ferrying its protagonist around Hiroshima during a lavishly subsidized artist residency. Throw in Hamaguchi’s co-screenwriting credit on his former professor Kiyoshi Kurosawa’s excellent new period thriller Wife of a Spy—another filmdeploying a geometric form of storytelling, espionage as a vicious circle—and it’s clear that the 43-year-old filmmaker is, as they say, having a moment. All this, even as the common denominator in his work, beyond the aforementioned precision engineering, is an acceptance of transience in all things, be they happy, tragic, or somewhere in between.

“I don’t tend to really strive for comedy or tragedy necessarily,” Hamaguchi told The Film Stage in March after Wheel of Fortune and Fantasy premiered—and won a Silver Lion—at Berlin. “But I realize it can be seen moment by moment in one way or the other.” The film’s flavoring is distinctly bittersweet, with potentially saccharine ironies leaving a tart aftertaste. A pair of female friends gossip happily about one’s romantic encounter until the other realizes she’s been listening to a description of her ex. A mature student tries to trap a notorious professor on behalf of a lover only to end up the subject of a public sex scandal. And a long-delayed reunion between high-school friends is derailed—and then enriched—by a case of mistaken identity.

The framing, editing, and line readings in all three episodes split the difference between percussiveness and placidity in accordance with Hamaguchi’s now recognizable (and recognizably Hong Sangsoo-ish) house style. What’s more impressive is how an omnibus obviously predicated on the element of surprise grows more—rather than less—predictable as it goes along. The best and most affecting segment is the last, “Once Again,” which utilizes a spartan, near-future sci-fi conceit to frame the encounter between Natsuko (Fusako Urabe) and Aya (Aoba Kawai), two middle-aged women who use a chance meeting to reflect on what initially appears to be a shared teenage history. In this version of the post-millennial world, a global computer virus has rendered smartphone and Internet usage obsolete. This unlikely (and purposefully absurd) circumstance not only contextualizes the melancholy, shaggy-dog joke at the story’s center but draws attention to the importance of communication in Hamaguchi’s work—the myriad and ineffable factors that impel people to query, commiserate, withhold, and equivocate in the company of familiars and strangers alike.

In Drive My Car, theater director Yūsuke (Hidetoshi Nishijima) carries on long conversations with his late wife Oto during car rides via old cassette recordings. Originally designed as a memorization technique for Yusuke’s productions, with Oto acting as a disembodied scene partner, the tapes now constitute a morbid form of spiritualism—a closed ritualistic communion with the dead. Adapting a short story by Haruki Murakami, Hamaguchi and his co-writer Takemasa Oe take the idea of the protagonist as a kind of prisoner strapped into the cosmic backseat and expand it—freely and brilliantly—into a drama that feels simultaneously claustrophobic and panoramic. The film’s rhythms are propelled by the paradox of automotive transport: the sensation of being inside and outside, stationary and mobile, all at the same time.

With these dichotomies in mind, the same text that binds Yūsuke to Oto—and the mix of grief, loneliness, and retroactive anger prompted by his knowledge of her extramarital affairs—is also the source of his liberation: Anton Chekhov’s inexhaustible family drama Uncle Vanya, which Oto is tasked with staging in an experimental, multilingual presentation at a theater festival in Hiroshima. The questions of why Yūsuke would take this gig—and cast a callow, pretty-boy television star (Masaki Okada) in the gravitas-heavy title role when he’s famous for playing it himself—are gradually unraveled through storytelling that takes agile delight in its various decelerations and detours. The lovely, funny, humane scene where Yūsuke and his taciturn young chauffeur, Misaki (Miura Toko), are invited to dinner with the festival director Yoon-su (Jin Daeyon) and his deaf actress wife Lee Yoon-a (Park Yoorim) is as deft and multidirectional as ensemble acting gets. Their conversation mirrors and anticipates the hypothetically clamorous dynamics of Yūsuke’s Chekhov adaptation, in which lines are to be delivered by actors in their different languages, including, in Lee Yoon-a’s case, by signing.

“Respond to the text,” Yūsuke advises his troupe, advocating on behalf of what he sees as Uncle Vanya’s eternal verities. In his view, the dialogue will inhabit and humanize the actors, and not the other way around; his direction is inscrutable but the ends justify the means. The Chekhovian underpinnings of Drive My Car can’t help but evoke Louis Malle’s sublime 1994 extrapolation Vanya on 42nd Street, which similarly blurred the lines between process, rehearsal, and on- and offstage realities. But where Malle stayed inside a theater, Hamaguchi makes all the world into a stage, composing the driving sequences with spacious, widescreen grandeur. Line for line and measure for measure, Drive My Car is packed with all kinds of literary and dialogical firepower. Yet Hamaguchi reserves his most curious and affecting eloquence for a wordless coda that not only references a production history bisected by Covid-19 but evokes life’s asymmetrical dimensions as opposed to the long, clean lines of even the worthiest and most enduring art. The nobility and beauty of the latter lies in its failure to fully imitate its source.

Adam Nayman is a critic for The Ringer and a contributing editor to Cinema Scope. He is the author of Paul Thomas Anderson: Masterworks and The Coen Brothers: This Book Really Ties the Films Together for Abrams, and Showgirls: It Doesn’t Suck for ECW Press. 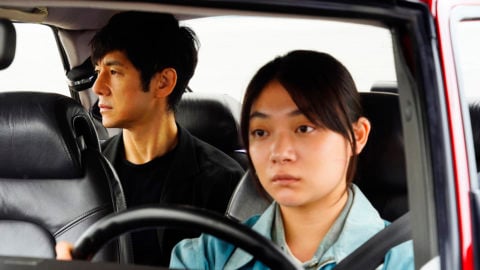 By Carlos Valladares
Baby, can’t you see: the director discusses his two 2021 festival standouts Drive My Car and Wheel of Fortune and Fantasy By Film Comment
Warm welcome: the podcast returns with guests Erika Balsom and Ela Bittencourt for an overview of the festival's virtual edition By Dennis Lim
Bending the rules: with the frenzy of Cannes in the rearview mirror, a few films reward consideration for their thoughtful reinventions By Jordan Cronk
It's the loneliest number since the number one: the Japanese director of Asako I & II follows a young woman's doubled romance to the bittersweet end

By Carlos Valladares
Baby, can’t you see: the director discusses his two 2021 festival standouts Drive My Car and Wheel of Fortune and Fantasy

By Film Comment
Warm welcome: the podcast returns with guests Erika Balsom and Ela Bittencourt for an overview of the festival's virtual edition
Subscribe to the Magazine

By Dennis Lim
Bending the rules: with the frenzy of Cannes in the rearview mirror, a few films reward consideration for their thoughtful reinventions

By Jordan Cronk
It's the loneliest number since the number one: the Japanese director of Asako I & II follows a young woman's doubled romance to the bittersweet end