By Violet Lucca in the September-October 2017 Issue

Much of the history of art is also a history of wealth, and the degree to which you value artists’ ability to slip commentary about the ruling class into their commissions will determine your interest in The Challenge. In this film comprised of lengthy, largely wordless shots of Arab falconers at a tournament in Qatar, images—presented without any explanatory titles or guiding narrative—are our primary guide to an ultra-elite world of privilege in the middle of the desert. There’s not much to distinguish the film’s exquisitely composed, opulent visions of the Middle East (shot by Jonathan Ricquebourg, Ancarani, and Luca Nervegna) from the images of flagrant excess you’d find in the Neiman Marcus Christmas catalog or a sleek, high-end fashion brand video circa 2008. The luxury of the content and form is intentionally overwhelming, and nearly every frame contains a perfect juxtaposition of the ancient and the modern, or of nature and technology: a cheetah rides shotgun in a Lamborghini; a tent set up for the event is equipped with a gold-inlaid entertainment center, leather couch, and flat-screen TV; a sheik rides in a private jet with separate windows and perches for each of his half-dozen falcons. Save for a group of bikers (one of whom rides a golden Harley), all of the falconers are youngish men wearing traditional ghutras and white thobs, which guarantees such contrasts. (Would a film about American women at an archery competition—another sport that has gone from functional hunting to something largely limited to the realm of the moneyed—be lauded as so inventive? Probably not.) Inviting us plebs to gape at all their luxury should not be confused with critiquing or even reporting on it. Extreme affluence is already on public display all around us and well documented, very often by the moneyed themselves—check out the “Rich Kids of Instagram” account for more up-to-the-minute news about how the top one percent lives.

It’s difficult not to view Ancarani’s scopophilia as fundamentally Orientalist, albeit dressed up in international art-house chic. The expansive landscapes sometimes make the falconers look like ants scurrying around underneath a microscope, but they also underscore how these men’s wealth separates them from the rest of the “modern” world. About halfway through the film, a long shot shows their campsite in the middle of the desert at night with the distant glow of a city behind them. (The skyline dwarfs their falconry competition, but their lights are far brighter.) The camaraderie between the men is one of the few things that signals they exist outside of the bubble of this competition, and quite possibly have lives and feelings that go beyond a Spring Breakers–esque demand to “look at my shiiiiiit.” 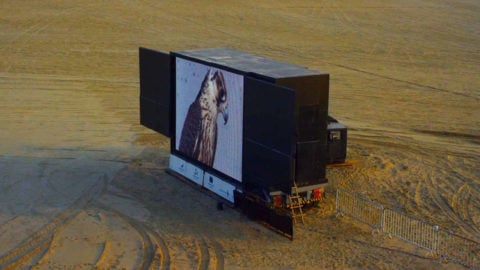 By Jonathan Romney
Inside the pleasure dome: the otherworldly wealth of Qatari sheikhs goes on display in this New Directors / New Films selection directed by Yuri Ancarani

By Jonathan Romney
Inside the pleasure dome: the otherworldly wealth of Qatari sheikhs goes on display in this New Directors / New Films selection directed by Yuri Ancarani

By Dan Sullivan
Double vision: connecting the dots from new Thai and Italian cinema to Jacques Rivette and Abel Ferrara
Subscribe to the Magazine