By Chloe Lizotte in the March-April 2018 Issue

Despite the mythical promise of the “open road,” romanticized visions of the American West often give rise to a directionless isolation. A loneliness pervades the narrow, deserted highway in the opening of Jerry Schatzberg’s Scarecrow, an improbable meeting place for Gene Hackman and Al Pacino’s drifters; the desert seems to swallow up a broken-down Harry Dean Stanton in Paris, Texas. In Andrew Haigh’s fourth feature Lean on Pete, 15-year-old Charley Thompson (Charlie Plummer) appears similarly adrift as he trudges across mesas with Pete, the ailing racehorse he’s trying to save from the slaughterhouse. In this multi-state sprawl, Haigh stresses Charley’s confinement—as his supplies dwindle, he looks dangerously small in high-angle shots, as though the landscape threatens to close in on him. 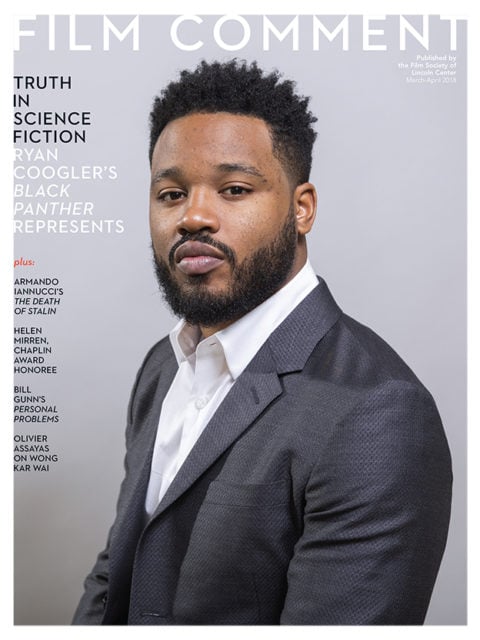 Although its solitude might call to mind Haigh’s earlier studies of emotional distance—whether a chamber piece exploring sexual intimacy (Weekend, 2011) or a character’s shattering estrangement from her own life (45 Years, 2015)—Lean on Pete is far heavier with incident. Haigh introduces us to Charley while he’s unpacking after moving to Portland, where his father (Travis Fimmel) has found work as a forklift driver; as a frequently uprooted only child, he is largely left to his own devices. While jogging, he becomes fascinated by a nearby horse-racing track, and picks up an under-the-table job assisting a horse owner named Del (Steve Buscemi) and one of his jockeys (Chloë Sevigny). It doesn’t take long for Charley to figure out that Del’s practice isn’t entirely clean, as implied by his arsenal of syringes (he assures Charley that the horses need “vitamins” before each race), but it’s a crucial supplement to his lower-middle-class income, and he quickly grows attached to an underdog racehorse named Lean on Pete. A startling loss soon ruptures this routine, and once Charley pieces together that Del might have Pete put down due to an inflamed leg, he packs the horse into Del’s trailer and drives off into the night, hopeful that he might reconnect with his long-lost aunt in Wyoming.

This escape takes place without any directorial flourishes, moving without fanfare from a post-race victory party to the quiet freeway on which he embarks. Instead, Haigh shocks and overwhelms Charley with narrative curveballs, and often unexpected outbreaks of violence. Conditioned by his parents to believe that most adults will either lash out or turn on him, he stays guarded while seeking stability, which drives him to cling to Pete. As they travel across the desert, Charley opens up to the horse and to us—sharing his dreams of making the football team, recounting his memories of friends with comfortable homes and families—and he strives to look out for Pete in a way that no one ever had for him. Apart from these scenes, Plummer’s performance is remarkably interior, bottled up behind his brimming wide eyes, and Haigh leaves enough space for the emotional weight of all that Charley is forced to process.

With each new person Charley meets, Haigh folds his story into the broader context of the post–economic crash U.S.: Del and his friends commiserate about the rise of millennial consumer culture; a trio of veterans ask Charley whether or not he’s planning on enlisting; a couple in a trailer park insinuate that Mexican laborers are taking away jobs. These interactions often feel wobbly or surface-level, especially in contrast to more organic reminders of the country’s unforgiving attitude towards placelessness. Momentarily letting down his gruff façade, Del warns Charley that he should “do something else before there’s nothing else [he] can do,” adding with Buscemian verve, “I feel like I’ll punch myself if I have to see another horse.” There’s something of the spirit of The 400 Blows that constrains Charley during his morning runs, the camera tracking alongside him as he moves in place—here, though, there’s no fleeting liberation in motion, just the dream of eventually coming to rest. By Jonathan Romney
The way we were: Andrew Haigh's chamber drama probes the insecurities arising from a revelation from the past By Jonathan Romney
The way we were: Andrew Haigh's chamber drama probes the insecurities arising from a revelation from the past

By Paul Dallas
Time piece: the British director explains why dropping a relationship bombshell in 45 Years gets us closer to true romance
Subscribe to the Magazine