By Manu Yáñez Murillo in the January-February 2006 Issue Catalunya’s cultural dynamism and artistic legacy is in large part associated with its cosmopolitan image. The artistic heritage of Picasso, Miró, and Dalí, Gaudi’s modernist architecture, and Barcelona’s design tradition are only the most prominent reference points. Yet Catalan cinema hasn’t achieved strong recognition, whether it be on its home turf, within the rest of Spain, or internationally. It is confounded by its own characteristics: it’s atomized, dispersed, and, for the most part, lacking coherent movements and waves through which its filmmakers might establish some kind of a dialogue, not to mention a consolidated industrial model. It also suffers from an identity crisis typified by the fact that while the Catalan language is the clearest manifestation of the region’s cultural difference, its cinema is, paradoxically, mostly in Spanish. The reasons for this are as much political—rooted in the repression of General Franco’s dictatorship—as they are cultural. And yet, having embraced numerous influxes of migrants and therefore regarding bilingual reality as a given, Catalan society is an open one.

At the beginning of film history two aesthetic schools developed in Catalunya: one, led by Fructuós Gelabert, was broadly realistic; the other, originating in the work of Segundo de Chomón, was notably fantastic. Chomón, who was born in Aragón and began working in Barcelona’s film industry in 1902, is considered one of early cinema’s great masters of optical effects. He was also the most international Spanish filmmaker of this period, working with the Pathé brothers in Paris and with Itala Film in Turin, and contributing to Abel Gance’s 1927 Napoléon. Chomón got his start by hand-coloring Pathé’s negatives, and quickly established himself as a genius of film illusionism, in particular due to his mastery of stop-motion animation. In his The Electric Hotel (El hotel eléctrico, 08), a couple moves into a hotel in which all the services and appliances move to the rhythm of a fuse box with a mind of its own. More than just a Spanish Méliès, Chomón was an artist who grasped how film could make the evolutionary leap from fairground attraction to narrative medium. After the Civil War (1936–39), the Franco regime eliminated all traces of Catalan identity in the film world. Nevertheless, beginning in 1947, a series of Catalunya-based movies were produced, with the aim of drawing audiences away from Hollywood imports. The most noteworthy of these was Llorenç Llobet Grácia’s Life in Shadows (Vida en sombras, 48). Despite its lack of overt social critique, the film’s unabashed and passionately cinephilic spirit was enough to get it banned. The boldness of having characters listening to Catalan on the radio, not to mention the film’s political ambiguity (which could be interpreted as opposition to the regime) counted for more at the time than its interesting formal and narrative discoveries, such as the mirror game that it plays out with Hitchcock’s Rebecca.

Around the mid-Sixties, when the military regime decided to embrace more liberal policies in order to improve its international image, a group of young filmmakers launched the Barcelona School. Its emergence was in reaction to the New Spanish Cinema and its perceived realist limitations. The Barcelona School was shaped by ideas arriving from the rest of Europe—the French Nouvelle Vague and newly emergent modernist forms in advertising, design, fashion, and photography. The guiding force of the movement’s avant-garde spirit and formalist acumen was a trio of filmmakers: Joaquim Jordà, Jacinto Esteva, and Carlos Durán. The film that really inaugurated the movement was Vicente Aranda’s Fata Morgana (65), which broke from conventional narrative with a collage of literary references—from Borges to Alice in Wonderland to Hamlet. It was soon followed by Dante Isn’t Simply Harsh (Dante no es únicamente severo, 67), the movement’s manifesto, which was co-directed by Jordà and Esteva. Dante deliberately lays bare its own mechanics, deploys characters devoid of psychology, and uses digression and fragmentation as narrative models (including a quote from Pierrot le fou). After a prologue in which we see the crew preparing to shoot the film, we enter a space in which dream and reality become one: certain surrealist stock images (Buñuel and Dalí’s slashed eye, for instance) are invoked, and the preeminence of form over content is realized. On the other hand, Durán’s Every Time That… (Cada vez que…, 67) contradicts the school’s own proclamations. Despite avoiding realistic principles, Durán’s films, in general, are accurate portrayals of certain social customs, such as Barcelona’s “party salons,” frequented by bourgeois youth infatuated with pop art, advertising, and the music video in its embryonic form. The Barcelona School proved to be ephemeral, coming to an end due to lack of interest, as well as its own lack of structure and means, infighting, and hostility from certain quarters of popular criticism, who accused the directors of inadequate political commitment and ideology. In 1975, Franco’s death and the subsequent arrival of democracy opened the doors for the recovery of Catalan’s cultural legacy, its cinema included. In 1981, in an effort to strengthen its industrial base, an annual Catalan Cinema Conference (the Conversas del Cine de Catalunya) was launched, resulting in the creation of an institutional model aimed at reflecting Catalan heritage and identity through language, history, and literature. But the resulting films had no impact beyond the region, and so eventually the model failed. While certain initiatives have survived—the dubbing of Spanish or foreign films into Catalan, for instance—none of them are directly related to production. Thus, the ongoing debate about the Catalan language in film has been subsumed by the alleged need to dub Hollywood releases into Catalan.

In this context, several filmmakers have chosen to work outside the institutional model. Of these, Pere Portabella is probably the most experimental. From his first forays into the vampire genre, Cuadecuc: Vàmpir (70) and Umbracle (72), to his essay on the confusion of artistic languages, Pont de Varsòvia (89), Portabella has always expressed a strong resistance to orthodox forms. This is most pronounced in his collage films, which, with their dreamlike resonances and political symbols, possess a double perspective. As the critic Domenech Font has pointed out, they are linguistically self-conscious and prompt the spectator’s participation in a “story without plot” only sustained by the gaze. Agustí Villaronga is another resistance-based filmmaker. His In a Glass Cage (Tras el cristal, 85) is both a morbid fable about the corruption of innocence and an allegory about Nazi atrocities, as well as an exemplary exercise in transgression. He repeated this approach in The Sea (El mar, 00) and The Child of the Moon (El niño de la luna, 89), and took it into the nonfiction realm with Aro Tolbukhin in the Mind of a Killer (Aro Tolbukhin: En la mente del asesino, 02). In a Glass Cage

Any overview of Catalan cinema would be incomplete without mention of Ventura Pons. A prolific observer of the manners and milieux of Barcelona life, he is the most internationally recognized of the region’s filmmakers. From films dealing with post-Franco social upheavals (like his 1978 documentary Ocaña, an Intermittent Portrait, which explores class tensions, celebrations of homosexuality, and newly regained freedoms) to social comedies about the existential conflicts and relationships of the bourgeoisie (Amic/Amat, 99) and the working class (Anita Takes a Chance, 01), Pons has always been a chronicler of the Catalan capital’s social universe. In some respects it is an imaginary universe with a theatrical and literary accent, frequently inspired by the writings of Quim Monzó, one of the most important authors in modern Catalan literature, and two outstanding contemporary Catalan playwrights, Josep María Benet i Jornet and Sergi Belbel. What It’s All About (94), for example, is structured in chapters based on various Monzó short stories.

It is important to note that the most interesting work made in the last few years has been within the experimental parameters of nonfiction film. This approach is exemplified by the documentaries of José Luis Guerín and Barcelona School alumnus Joaquim Jordà, who was creatively reborn with the magnificent Monkeys Like Becky (Monos como Becky, 99). Here Jordà provides a lucid discourse on the thin line between sanity and insanity, creating a veritable hall of mirrors based in representation and fictionalization: he films the patients of a mental hospital rehearsing a play about the assassination of Egas Monis, the inventor of the lobotomy, and, having recently suffered a cerebral hemorrhage, he includes himself as one of the film’s subjects, exposing the physical and mental damage incurred. Having shaken the very foundations of the psychiatric system, Jordà moved on to the judiciary in About Children (De nens, 03). Through a methodical study of a pedophilia trial in Barcelona, Jordà reveals the weaknesses of the judicial process and its submission to the power of the media. At the same time, he offers a sharp portrait of popular resistance to government-imposed urban renewal. This stance aligns his film with Guerín’s masterful En construcción (01), which records the demolition of a building and the construction of a new one over the course of two years in Barcelona’s red-light district (Barrio Chino), an area now known as Raval. Guerín creates an ode to the identities buried by urban reconstruction, observing the passage of time in an essay film about the transformation of the present and a nostalgia for the past—including the past of film history, reflected in several genuinely Hawksian characters and a direct quote from Land of the Pharaohs. In previous films, Guerín had toured the ghostliest corners of cinematic archaeology with Shadow Train (Tren de sombras, 97) and paid tribute to his masters: John Ford was honored in the documentary Innisfree (90), about the repercussions of shooting The Quiet Man in the eponymous town; the legacies of Bresson, Dreyer, and Victor Erice were evident in Berta’s Motives (Los motivos de Berta, 85).

The work of these two nonfiction masters has found a recipe for creative continuity within the Master’s Program in documentary at the Universitat Pompeu Fabra in Barcelona. Both Jordà and Guerín are program instructors, and have developed their recent films within its framework, while at the same time finding promising successors among their students. The most outstanding example to date is Mercedes Álvarez, whose The Sky Turns (El cielo gira, 04) is a crepuscular study of the imminent extinction of her native town, Aldeaseñor. Her film, a nostalgic evocation of remembrance, portrays memory and the passage of time by fusing documentary elements and fictive strategies. It is a combination that embodies the greatest virtues of contemporary Catalan cinema.

Manu Yáñez Murillo is a film critic and journalist based in Barcelona. He is the editor-in-chief of the website Otros Cines Europa and the editor of the anthology La mirada americana: 50 años de Film Comment. 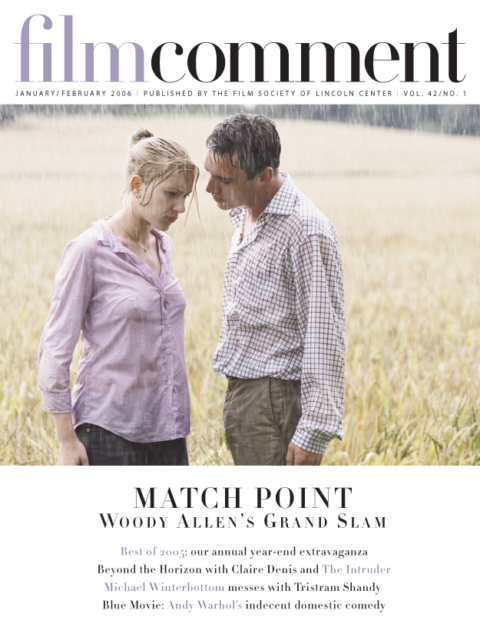 From the January-February 2006 Issue
Also in this issue
Hot Set: Southland Tales By Mark Olsen
Review: Bubble By Amy Taubin
Review: Battle in Heaven By Frédéric Bonnaud
Subscribe to the magazine
Categories: Journals