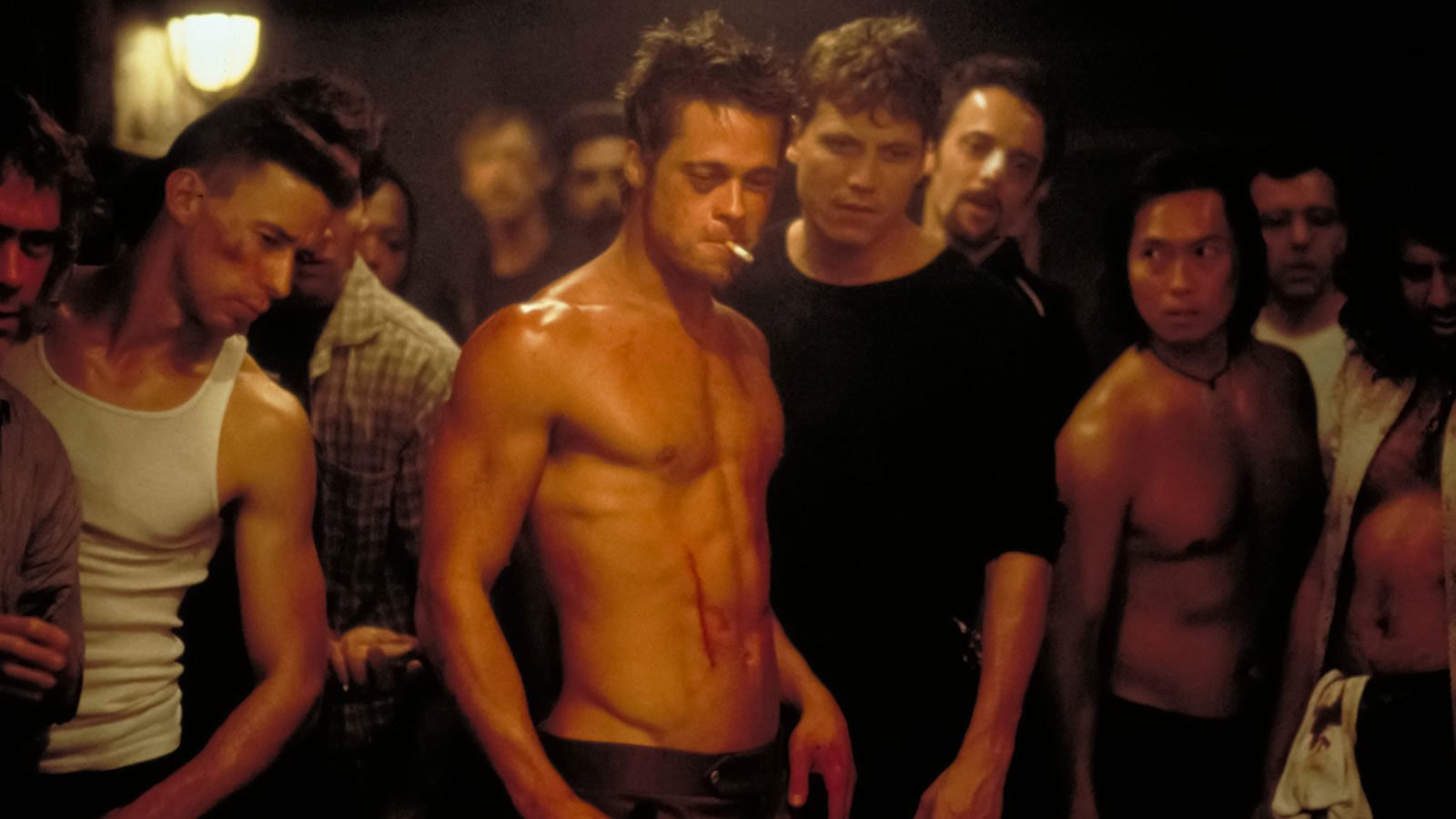 Inside Out: David Fincher

By Gavin Smith in the September-October 1999 Issue

It’s tempting to describe David Fincher’s stunning, mordantly funny, formally dazzling new movie Fight Club as the first film of the next century and leave it at that. It certainly suggests a possible future direction for mass-appeal cinema that could lead it out of the Nineties cul-de-sac of bloated, corrupt mediocrity and bankrupt formulas. Indeed, its vertiginous opening credits shot—a camera move hurtling backwards from the deepest recesses of its main character’s brain, out through his mouth and down the barrel of the gun that is inserted into it—could almost be a metaphor for the cinema viewer’s predicament. From the September-October 1999 Issue
Also in this issue
Cinema With a Roof Over its Head By Kent Jones
Ghost Sonata: Eyes Wide Shut By Richard T. Jameson
Head Wide Open: Being John Malkovich By Chris Chang
Subscribe to the magazine

Based on the novel by Chuck Palahniuk, Fight Club is ostensibly an anti-New Age satire on both the dehumanizing effects of corporate/consumer culture and the absurd excesses of the men’s movement. Its main character is a twentysomething wage slave (Edward Norton) whose voiceover discloses a sardonic, dissenting, but impotent interior life beneath his subdued exterior conformity. Finding relief from chronic insomnia by attending multiple self-help group meetings under false pretenses, he leads a pallid, vampiric half-life, feeding vicariously on the catharsis and suffering of others. He reluctantly shares his perverse addiction with Marla, a despised fellow misery “tourist” (Helena Bonham-Carter, whose damaged-goods-with-attitude turn is something of a revelation). In the course of his travels as a “recall coordinator” for a major car manufacturer (a job that deeply implicates him in the casual cynicism and corruption of corporate America), this unnamed protagonist encounters and falls in with an elusive, slightly outrageous trickster individualist called Tyler Durden (Brad Pitt).

For all his ironic distance, the nonconformism of Norton’s character pales in comparison. Durden, with his outlandish self-presentation and ersatz-Nietzschean pronouncements, is everything our narrator isn’t. He answers to nobody, sees through the hypocrisies and agreed deceptions of modern life, is given to casually mentioning, say, the recipe for making nitroglycerin out of soap, and in his part-time job as a movie projectionist amuses himself by splicing single frames of pornography into family movies. In his best work to date, Pitt, who’s always good when he takes risks as an actor, relishes every juicy moment. The two men seal a kind of unspoken pact with a spontaneous fistfight—something that becomes a regular activity. Before long, other men begin to participate, and a club is founded for weekly one-on-one fight sessions. Durden also takes up with Marla, to our narrator’s disgust. In sharp contrast to the drab ambiance of the narrator’s prosaic daytime world of offices, hotels, and public spaces, Durden inhabits a disorderly realm of eccentric dilapidation that suggests a shadowy subconscious hinterland. As Durden’s influence on him grows, the protagonist becomes an accomplice in his escalating program of antisocial pranks and subversive mischief, until they take an abrupt left turn with the formation of a quasimilitary all-male cult with an expressly antisocial, revolutionary agenda—a kind of surreal prole insurrection against bourgeois values.

For all their emphasis on hard surface, vivid texture, and sensational effect, Fincher’s previous films staked out suggestively dreamlike psychic/narrative spaces: Ripley’s rude awakening from cryogenic suspension in Alien3 (92), Somerset going to sleep to the tick of a metronome in Seven (95), the living nightmare of The Game (97). A tale told by an insomniac who doesn’t know when he’s asleep, Fight Club takes things one step beyond into new realms of dissociation and movie mindfuck. Suffice to say viewers might wonder just what they can trust: Is Tyler Durden projecting this movie? And just how reliable is this flipped-out narrator anyway?

To be sure, this film is the culmination of a recurrent Fincher scenario: repressed straight white masculinity thrown into crisis by the irruption of an anarchic, implacable force that destabilizes a carefully regulated but precarious psychosocial order. In Alien3, a shaven-headed, celibate, all-male penal colony of killers that anticipates Fight Club’s “space monkey” cult of violent, obsolete masculinity is disturbed first by a woman, then by a destructive libidinous organism. In Seven, locked in an endgame with a killer who’s equal parts deranged artist and Old Testament avenger, Morgan Freeman’s troubled, paternal detective seems to act with the stoic understanding that an older civilization of culture, values, and reason that he defends has been all but submerged in a Bosch-like world of corruption and chaos. The sterile, controlled universe of Michael Douglas’s uptight millionaire tycoon in The Game unravels until he is stripped of everything he relies upon to define himself—though in the end, masculine power and privilege remain intact, indeed reaffirmed, by the ordeal. In Fight Club, sweeping through the main character’s tidy, airless life like a tornado, Tyler Durden is a galvanizing, subversive force dedicated to revolt against the inauthenticity and mediocrity of modern life, seeking a nihilistic exaltation of disenfranchised masculinity through self-abasement and destructive transgression.

Fincher’s films seemingly repudiate the values he’s paid to uphold in his TV commercials. All his features, Fight Club especially, seem to be reactions to or commentaries upon the seductive, fabricated realities, spectacles of consumption, and appeals to narcissism and materialism of commercials. The dreamlike suspension, relative freedom from conventions and formats, and formidable technique that distinguish Fincher’s sensibility have been honed or acquired from commercials and music videos, with their routinization of spectacle and “style,” conceit-based construction and permissiveness in terms of breaking down film grammar conventions. (Fincher’s 1989 Madonna video “Oh Father” demonstrates the potential aesthetic discipline and integrity of the form at its best.) His features apply these qualities to more complex, rigorous aesthetic strategies: the starkness and fragmentation of Alien3 with its minimization of wideshots and spatial resolution; the gliding, hollow sleekness of The Game; the luxuriating in painstaking abjection and gloomy decay of Fight Club and Seven.

Fight Club belongs to a distinct moment of both dread and rupture in American mainstream cinema, also manifested in The Matrix and traceable at least as far back as Verhoeven’s Starship Troopers. The acceleration and dissolution potentially ushered in by digital cinema are only a partial manifestation of this. There’s a kind of dissociative hyperrealism operating in Fincher’s film, and a mocking sense of flux and liminality in its attitudes and values both formally and conceptually. Its recourse to evident digital imagery has less to do with expanding the boundaries of what can be visualized than with a derangement of or insolence toward cinematic codes and conventions concerning authenticity and the narrative representation of space and time. (In an early, defining scene, Fincher’s protagonist, ironically contemplating his consumerist lifestyle, moves through his condo as it transforms around him into a living Ikea catalog with prices floating in space.)

Is Fight Club the end of something in cinema, or the beginning? Zeitgeist movie or cult item? Whether you find the state-of-the-art cinematic values of this current moment liberating or oppressive, radical or specious, of lasting significance or entirely transitory, as the little girl in Poltergeist says: they’re here.